During the European Clinical Video Session Contest, six speakers presented their clinical cases in video format. They were selected from the applications submitted from around the world. This innovative session format allowed candidates to present clinical cases through video clips, and discussed the details afterwards.

The videos can be viewed online here.

This case involved the replacement of a central incisor with immediate implant placement and immediate provisional crown. The whole procedure was performed using a fully digital workflow. At the time of surgery, the provisional crown did not fit properly because the temporary abutment was overcontoured, which had not been previously planned. Six weeks after surgery the patient had soft tissue inflammation and crown mobility (which was resolved by retightening the screw).

“The whole procedure was performed using a fully digital workflow.”

The final result was achieved with a screw-retained metal-ceramic crown. The speaker highlighted that the main goal of this technique was to maintain the aesthetics, instead of recreating them. It has already been shown that highly predictable results in terms of tissue stability can be achieved with this technique (Arora et al. 2017). A digital workflow can improve efficiency and reduce chair-side time. However, the speaker emphasised that careful case selection together with operator experience are the most important factors for success. 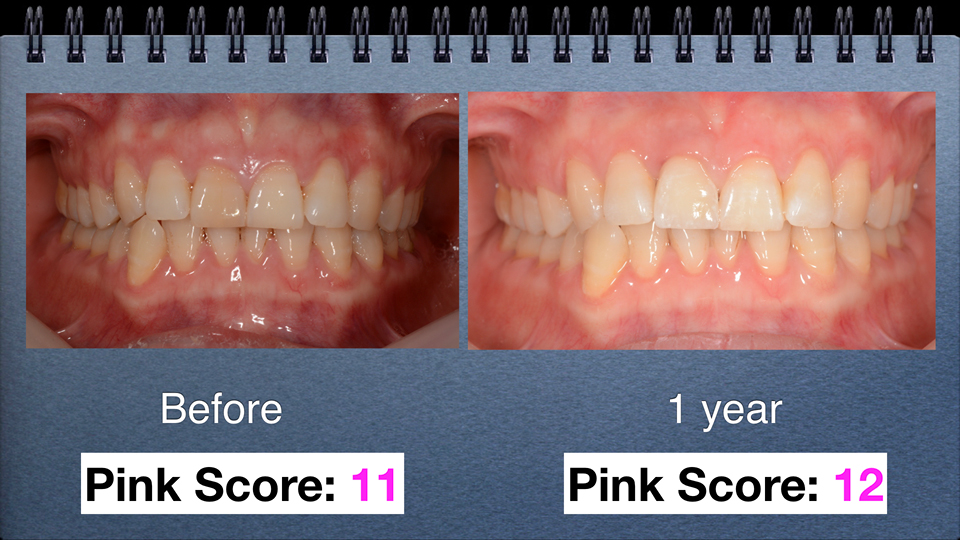 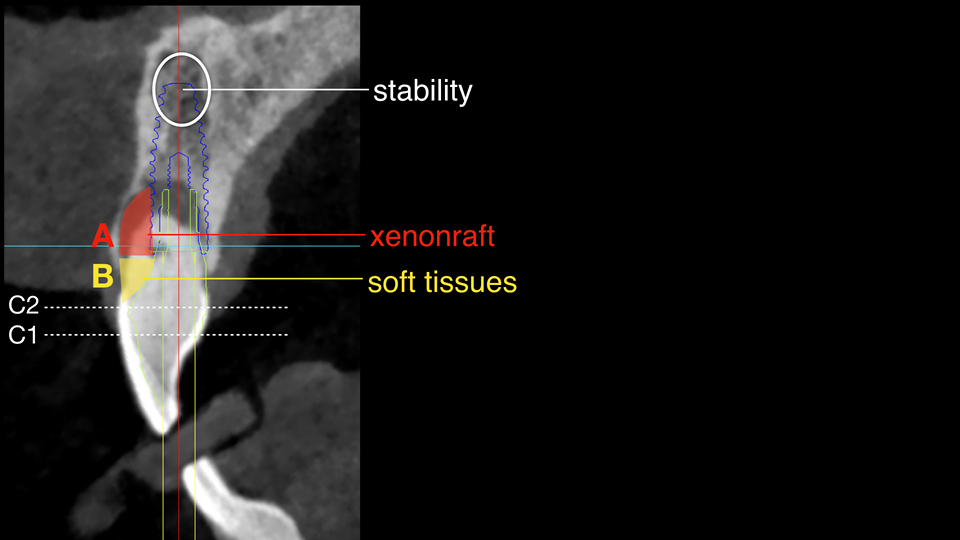 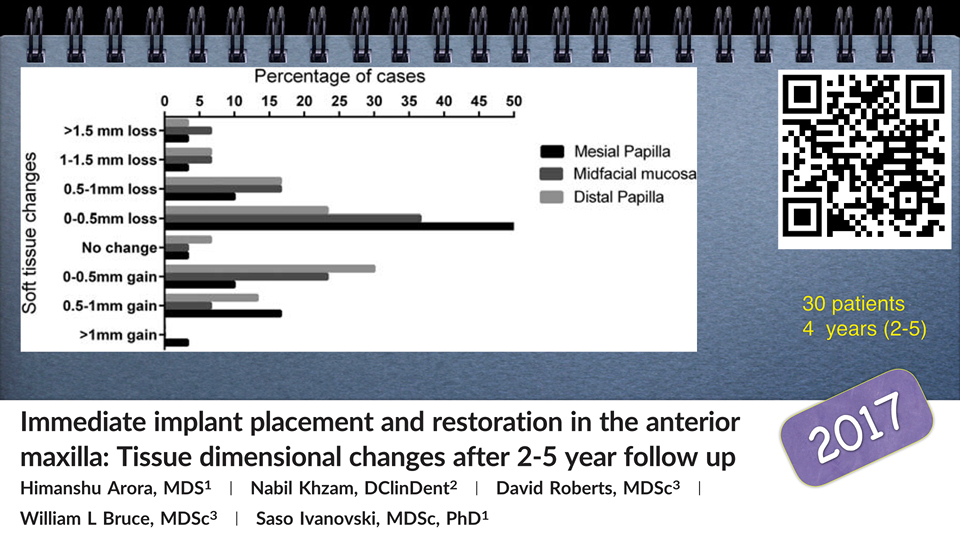 This video presentation showed a case involving multiple gingival recession which was treated with the vestibular incision subperiosteal tunnel access (VISTA) technique. The VISTA technique allowed for coronal advancement of the flap while protecting the soft tissue graft inside the tunnel without papillae reflection. The procedure had the following steps:

The literature points to a coronally advanced flap (CAF) and connective tissue graft (CTG) as the best combination to obtain root coverage and volumetric tissue gain (both around teeth and implants), but predictable results can also be obtained with the VISTA approach.

“Predictable results can also be obtained with the VISTA approach”

The speaker is currently involved in a longitudinal study to analyse the clinical results of the VISTA technique. The volumetric changes in 2D and 3D are measured by software superimposition of the pre- and post-operative scanned models. The results can be seen in the figures. Some predictive factors were identified: recession class, tooth type, gingival thickness, root prominence, recession depth and recession width. 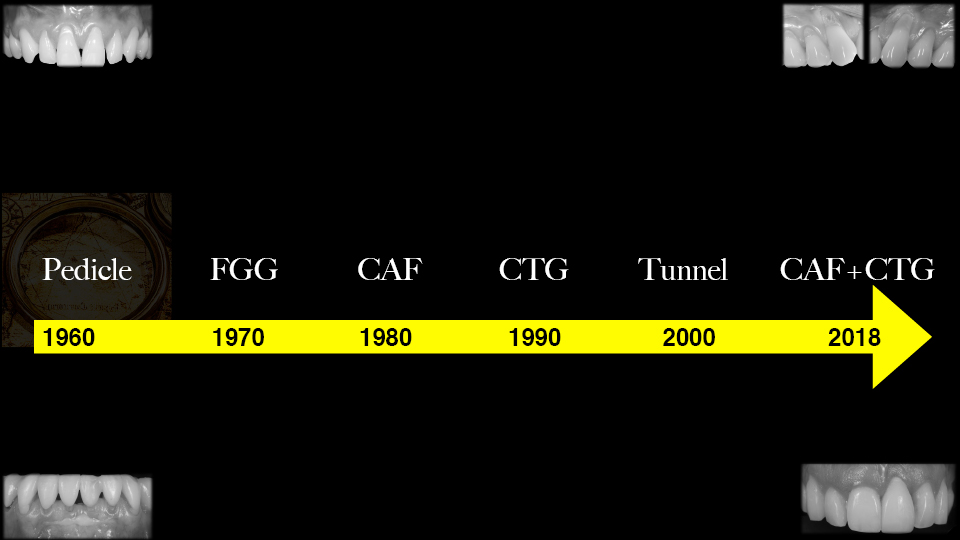 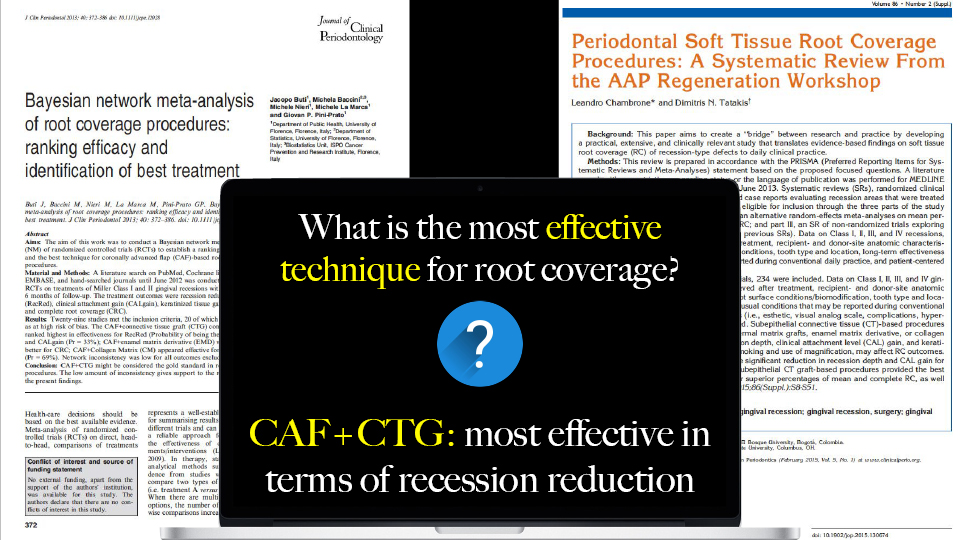 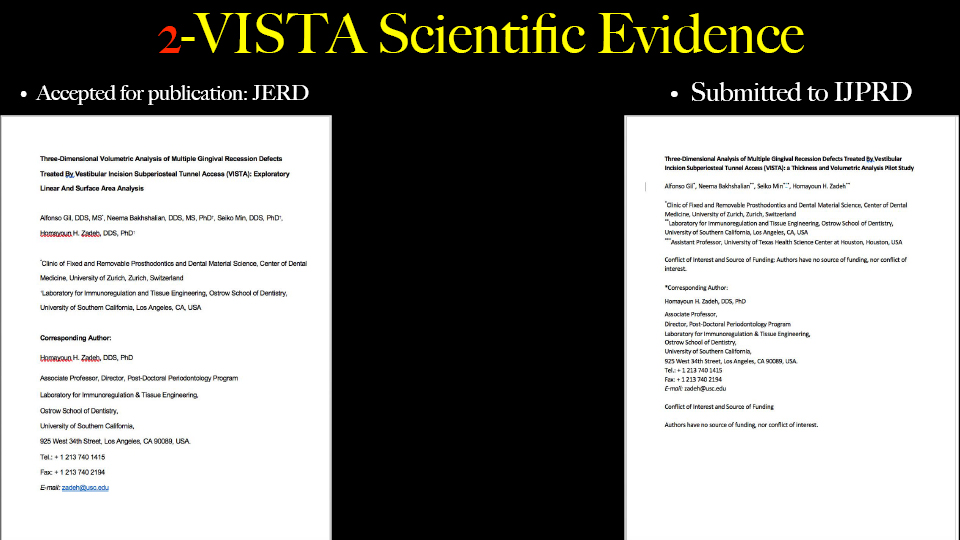 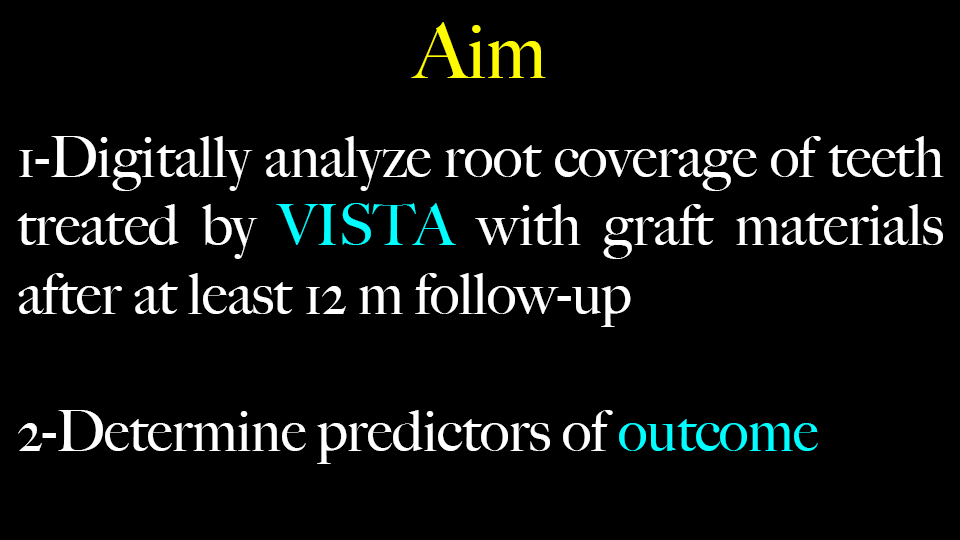 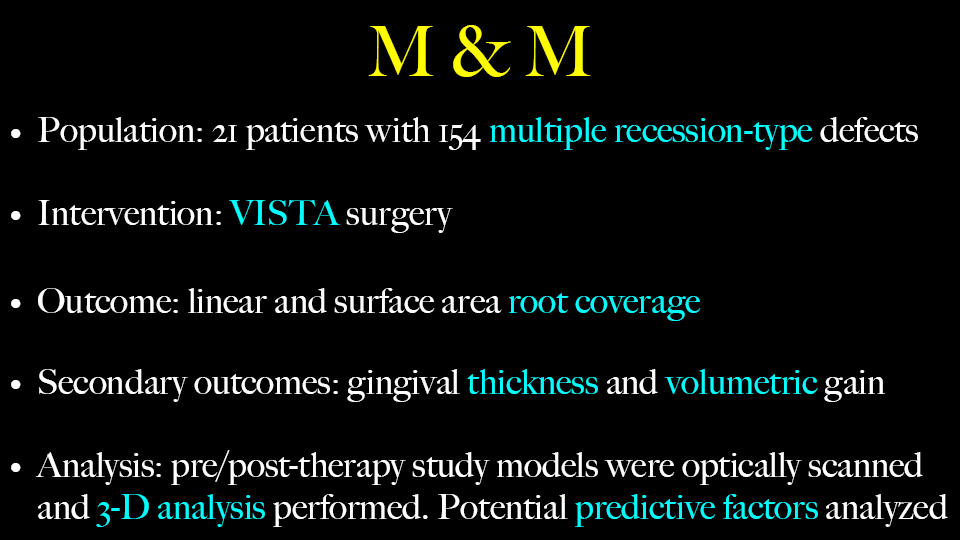 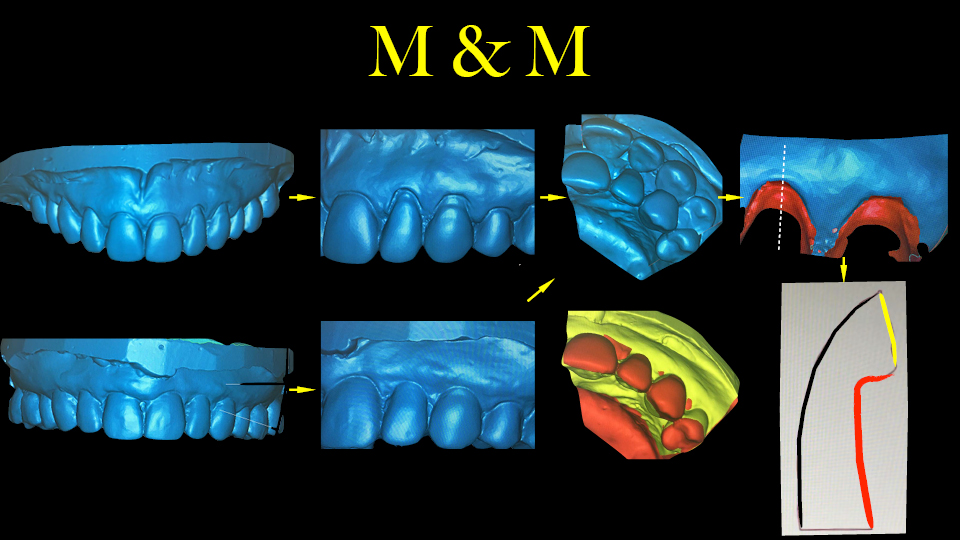 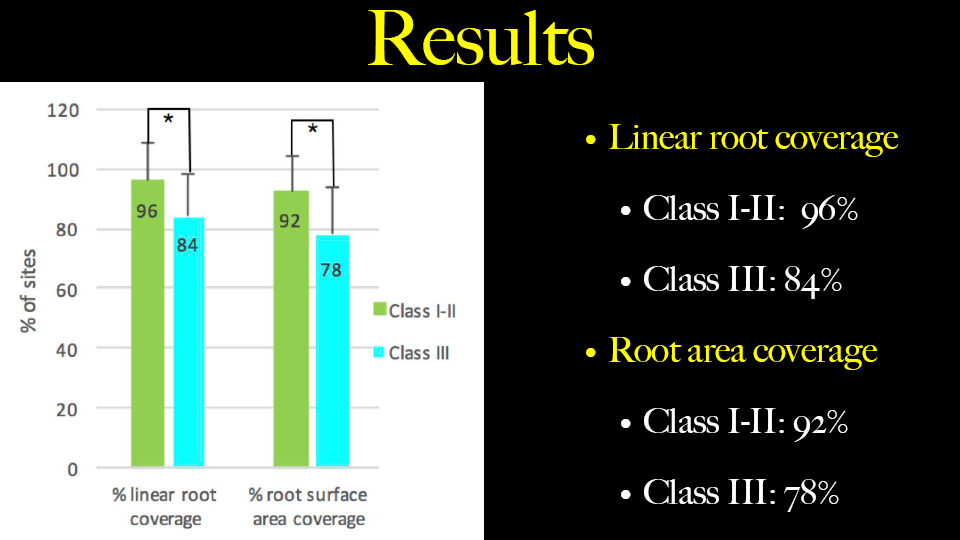 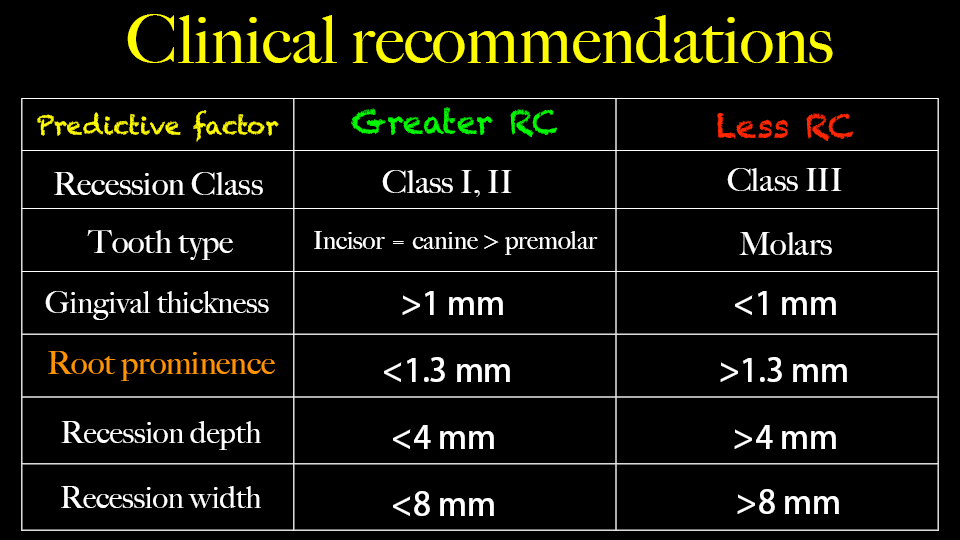 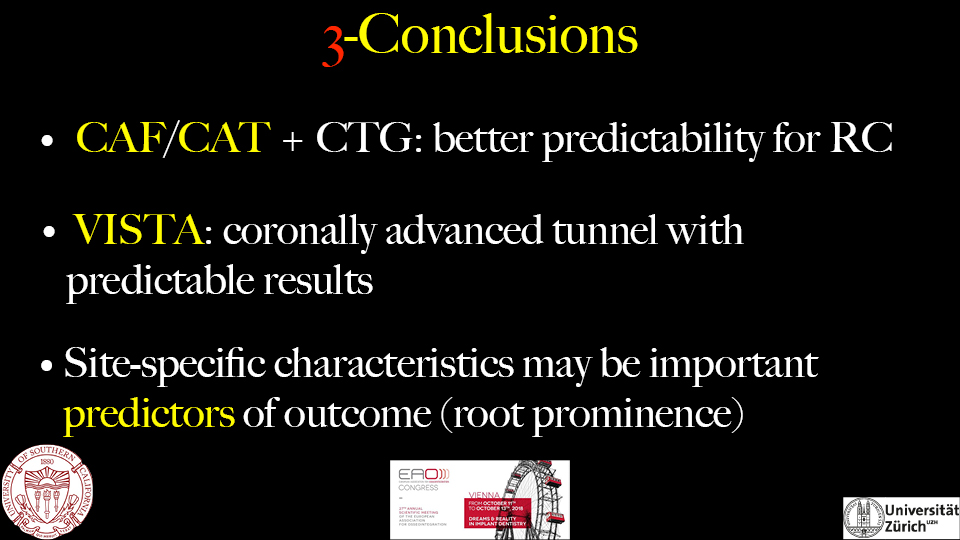 The speaker presented a case involving a peri-implant soft tissue dehiscence around the right upper central incisor. The treatment plan was threefold:

In the first step, the prosthetic component was removed. A new, thinner abutment was placed without the crown. This procedure has been shown to result in better coverage (Burkhardt et al. 2008; Zucchelli et al. 2012). The second step involved multiple coronally advanced flaps after four weeks. According to Zucchelli et al. (2009), this technique compares favourably in terms of the aesthetic outcome with those approaches involving vertical releasing incisions.

“This procedure has been shown to result in better coverage”

The connective tissue graft (CTG) – regardless of its source – should be a dense tissue, rich in fibres and with as little glands or fat as possible (Studer et al. 1997; Zucchelli et al. 2010; Dellavia et al. 2014). Before detaching the graft from the palatal mucosa, the epithelium was removed. The graft was then double-folded before adapting it to the recipient site.

Before the definitive crown in was installed at 11, the left central incisor had to be extracted and an immediate implant was placed. Finally, two cemented crowns were placed at 11 and 21 and two laminate veneers at 12 and 22.

When an implant is poorly placed, a decision must be made whether to improve aesthetics by soft tissue augmentation or to remove the implant and start again from the beginning. 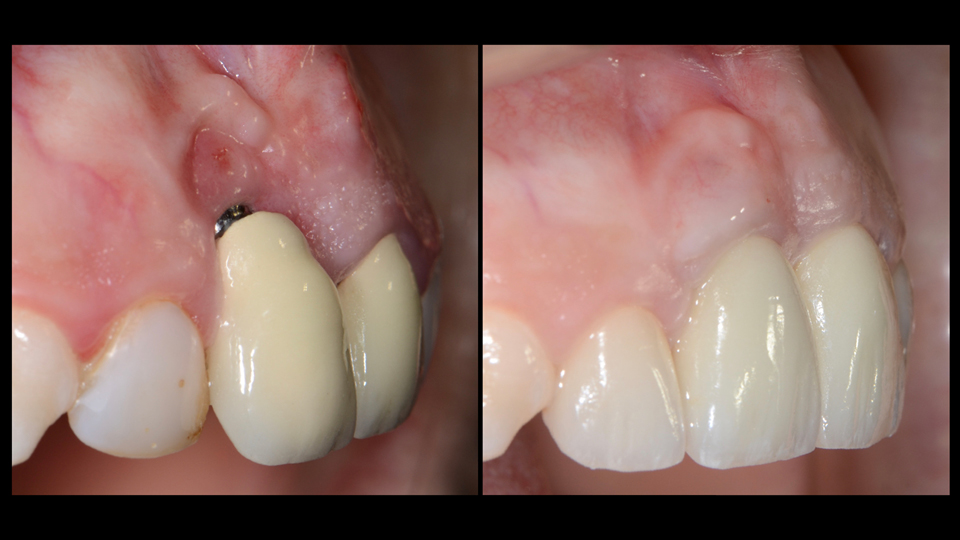 The speaker showed a case involving lateral sinus elevation, where the left upper first molar was absent, the second molar was present and the third molar was included. The third molar was extracted and cut with burs. The tooth slices were then placed into a manual bone mill. The milled tooth material was then mixed with water and bone particles which had previously been collected using a bone scraper.

The procedure was as follows:

Two control CBCT scans were taken, one immediately after surgery and another one 12 months later. The CBCTs recorded a bone volume gain of 1.63 and 1.46 cm3 respectively.

It is well known that dentin material and bone have a similar composition: hydroxylapatite, type I collagen and H2O. The six-month histological evaluation showed that bone formation (osteogenesis) had taken place, with enamel and dentin particles encapsulated in both sinus and alveolar ridge augmentations (Pohl et al. 2016; Pohl et al. 2017). The speaker reported that the clinical success rate of this procedure in 55 patients and after a seven-year follow-up period was 100%.

In this video, a new implant design was used with maxillary sinus floor elevation. The design allowed the implant threads to ‘rescue’ chips of bone from the osteotomy walls at the moment of insertion. After the Schneiderian membrane is lifted, these bone chips are pushed further into the sinus while the implant is inserted. It is hypothesised that the bone debris created by the drilling can facilitate new bone formation in the defect. Some studies on sinus floor elevation have come to this same conclusion (Dhore et al. 2008; Tabassum et al. 2009; Jungner et al. 2014).

The video showed footage from the endoscopy, where it was visible how bone particles from the osteotomy attached to the implant surface and climbed along with it at the time of insertion into the sinus cavity. After the implant was placed (without grafting) the bone of the lateral bony window was replaced and ‘fixed’ with cyanoacrylate in the same position as it was before. 12-month post-op CBCT images showed bone formation around the implant, mostly around the middle third, with less around the apex.

The speaker began by presenting relevant scientific background for four topics related to his clinical case:

The speaker then presented his case: teeth 12 to 23 were replaced with three implants at 11, 21 and 23. Both the provisional PMMA restoration and the final zirconia restorations were screw-retained.

The digital workflow allowed a precise comparison to be made between the ‘before and after’. The accuracy of implant placement and the volumetric changes of the soft tissue were compared by superimposing the images, giving satisfactory results. 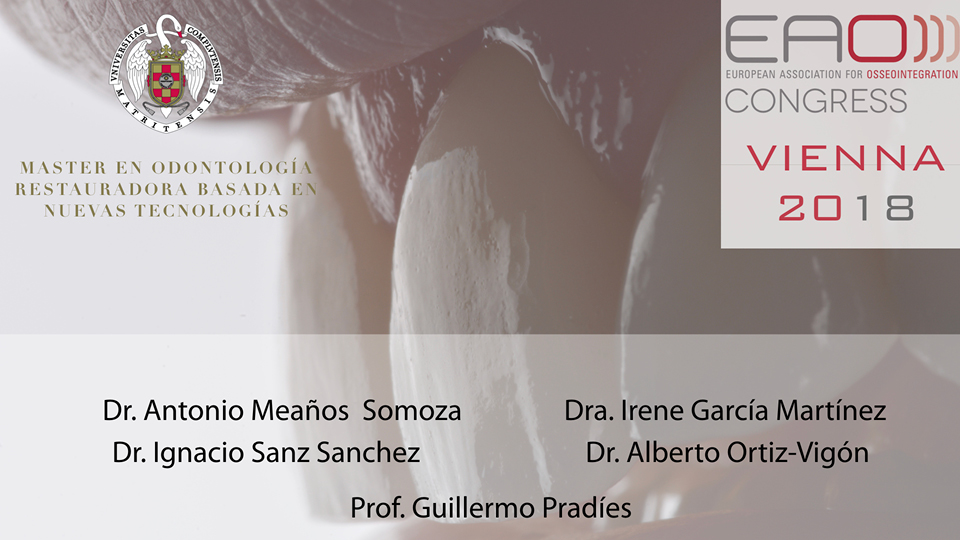 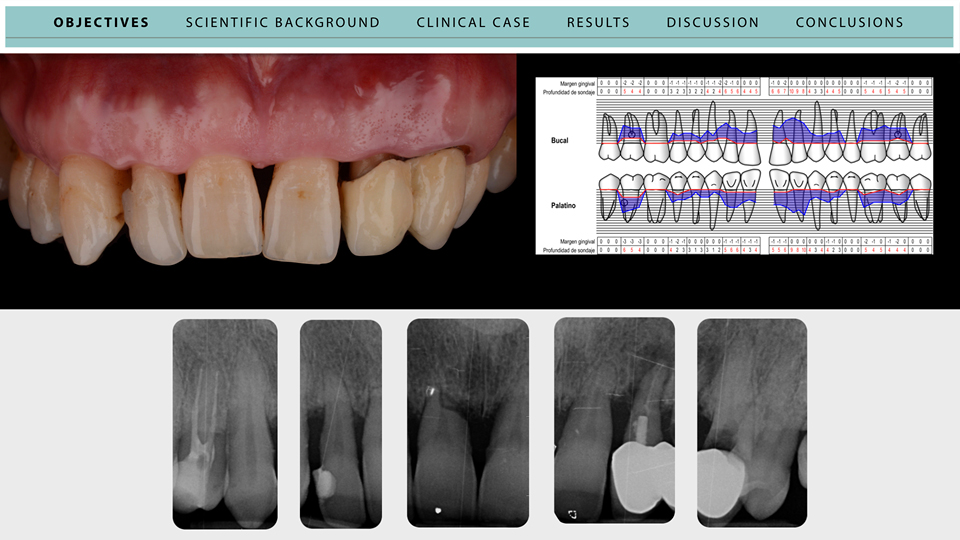 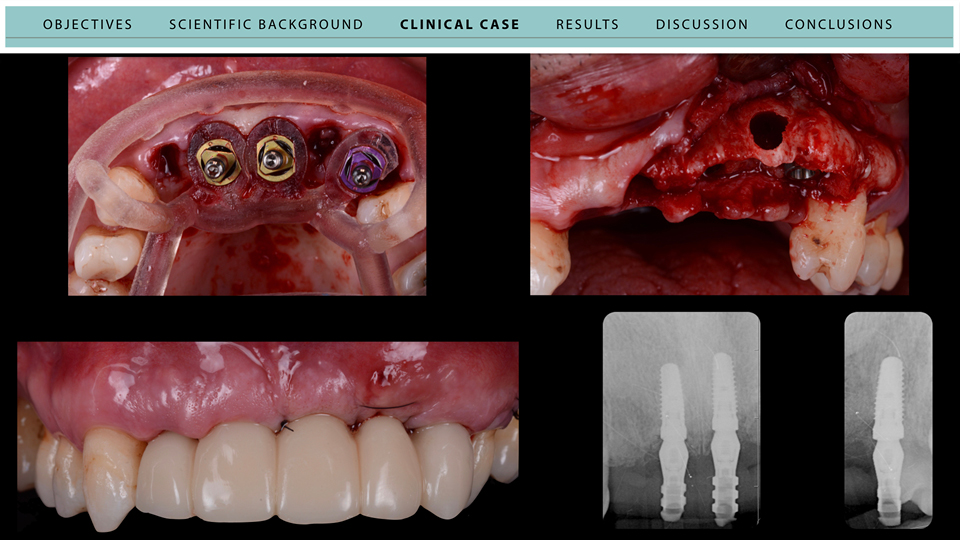 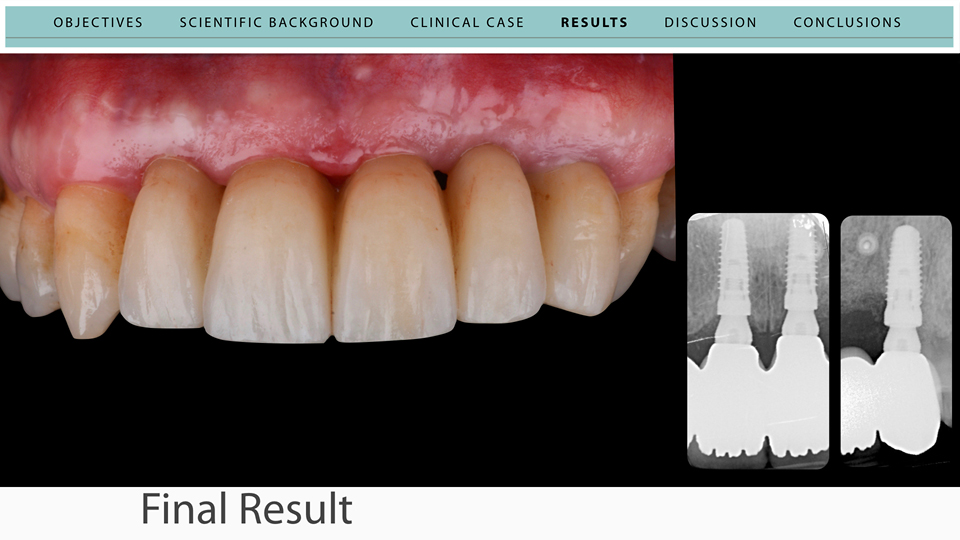 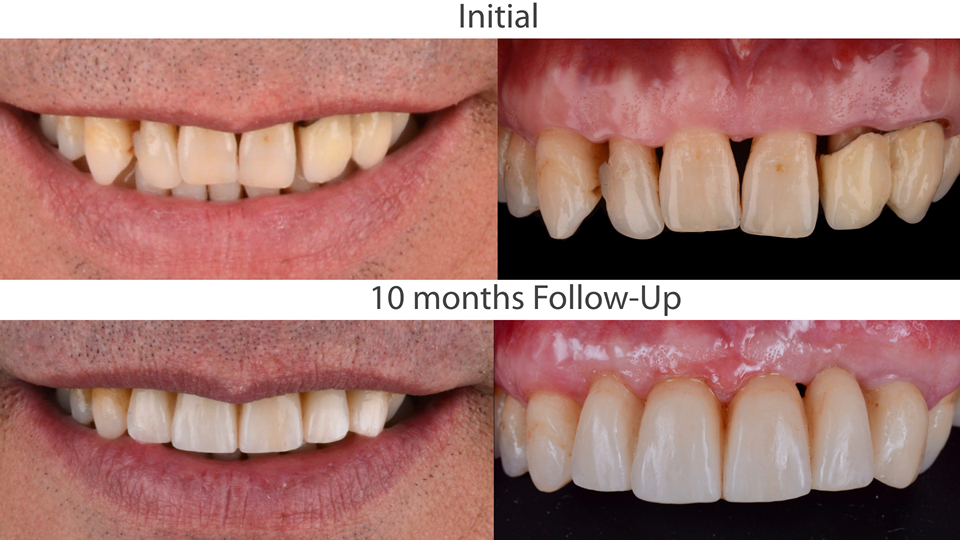